Is there a way I can help you?

I am currently also looking for helping eyes to spot mistakes in each room so that it reflects how it is in the actual game. If you’re interested in helping out, you can join my Discord server here, or shoot me a PM: The Embraced One#6059

I also won’t turn down a cup of coffee to keep me going, so I made a Patreon, SubScribeStar and Kofii page to allow people to support me if they want to, but currently I have no plans to make any exclusive content:

Any support from these pages goes towards covering hosting and domain expenses for Hallownest.net.

What makes your mapping project different from RainingChain’s?

RainingChain’s map is functionality-focused, with pins on it that mark charm, NPC, upgrade and other locations. My map is purely an art project and will not feature any such elements. It is assembled from thousands of screenshots and a lot of draw-over and correction is involved, resulting in a very detailed map that is zoomable to gameplay-view.

Rules I make my map with

(basically everything untouched and present – hopefully this’ll make it useful for detailed guides and the Wiki!)

I’ve seen a mistake/encountered an error, what do I do?

If you noticed any weird thing or mistake, be it on the website or on the map itself, please contact me so I can correct them! You can contact me via my profiles or email on my Contact page or you can join my Discord here.

How big is the end map going to be?

Will you do dream and indoor areas?

One of my ideas would be to incorporate dream/indoors areas via a button (that would be displayed where each indoor or dream area is accessed from) and it’d perhaps dim the map and show the indoors/dream area on top at normal brightness. I have no idea whether it’s possible with the map script I have, and if it is, I will need to seek further help from someone who understands how to work with the script. I’ll only worry about this once the overworld map is completed.

Why are some room connections dim/darker?

There are transitions in my map that are non-existent ingame. I made these up to connect rooms that otherwise would be impossible to connect, but did not want these to be distracting so I’ve made them dimmer. You can check some work in progress shots and a more detailed explanation of this process here.

Where does your name come from?

I used to invade in Dark Souls 1 “cosplaying” Lautrec of Carim. “Knight Lautrec of Carim” and “Lautrec the Embraced” were too long in the character creator (or something liket hat) and so I went with “The Embraced”. I started using it as a nickname online, but later found out that there is a band called “The Embraced” and some pointed it out that it sounds weird, so I added “One” to the end.

For those of you not familiar with Lautrec, his armour description reads:

Armor of Lautrec the Embraced,
representing the goddess Fina’s love.

The goddess’s arms wrap around it, as if to
embrace the wearer. 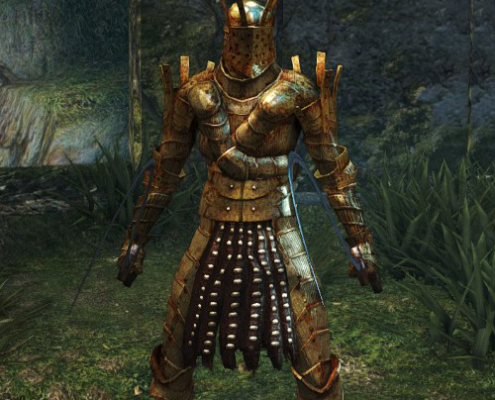 This site uses cookies. By continuing to browse the site, you are agreeing to our use of cookies.

Because these cookies are strictly necessary to deliver the website, you cannot refuse them without impacting how our site functions. You can block or delete them by changing your browser settings and force blocking all cookies on this website.

If you do not want that we track your visist to our site you can disable tracking in your browser here:

We also use different external services like Google Webfonts, Google Maps and external Video providers. Since these providers may collect personal data like your IP address we allow you to block them here. Please be aware that this might heavily reduce the functionality and appearance of our site. Changes will take effect once you reload the page.